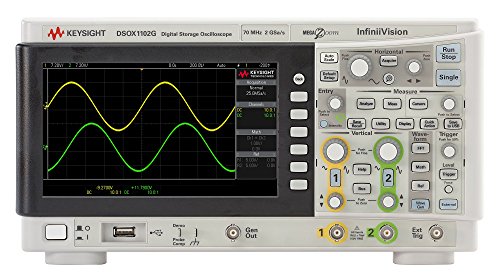 Keysight is known for making top quality oscilloscopes catered to professionals. The Keysight 100 X-Series is their entry into the entry level market catering to hackers, hobbyists, students and general consumers.

It’s sort of like if Lexus, who is known for top quality automobiles, decided to create a more affordable version while still maintaining strong engineering and design principles – aka Toyota, and then gave users the ability to hack the bandwidth (upgrade the horsepower). People are understandably excited and have lauded praise on the Keysight oscilloscopes, most notably the Keysight DSOX1102G.

Keysight DS0X1102G Oscilloscope at a Glance

This is a small oscilloscope but it’s packed with a lot of features. There’s a built in multimeter, frequency counter and waveform generator. And it boots up in about 20 seconds, which is relatively fast compared to most ‘scopes, particularly given its rich feature set.

Bandwidth: It’s no secret that many oscilloscopes are hackable, allowing the user to double the bandwidth in many cases. Perhaps this is the case with the Keysight oscilloscope as well. It’s advertised as having a bandwidth of 100 MHz, but there have been several reports of people hacking it to increase the bandwidth to 200 MHz.

Moreover, the 100 MHz version of the oscilloscope comes with 200 MHz probes. This is Keysight’s not so subtle hint that you should hack away to access its greater bandwidth.

We’ve previously written about the Rigol DS1054Z and though the Keysight DSOX1102G costs more than twice as much, it’s still considered an entry level oscilloscope so we couldn’t help but compare the two o-scopes.

One thing we noted was the increased responsiveness of the Keysight as compared to the Rigol thanks to the Keysight’s built-in Megazoom ASICs. There’s no noticeable delay when pressing menu buttons, which is nice when you’re offsetting waveforms, for example.

The menu is fairly intuitive and the options are well structured with helpful settings that explain certain options and features by depressing the buttons for a few seconds. Press it twice again to navigate to the previous screen or press the middle of the button to set default values.

The buttons may take some getting used to since they’re a bit small, give the Keysight’s relatively small footprint, but once you’ve got them down, it all starts to make sense thanks to the ‘scopes responsiveness and availability of “push to select” on all of its front panel knobs.

The Keysight DSOX1102G has a sharp and clear 7” high resolution screen that makes viewing waveforms a simple matter. It looks better than the Tektronix and the Rigol in my opinion, and this is perhaps due to the fast update rate.

Note, there is about 1” of the Keysight’s screen dedicated to displaying info such as sample rate and math equations.

In short, its pretty great! For examining the waveform in more detail, Keysight offers the ability to take precise measurements with the coursers, compare different sections of the waveform, and even examine different parts of the FFT.

For simple digital debugging, there are 5 types of serial buses available to decode with common protocols covered: CAN, I2C, SPI, UART and CAN. Each has their own dedicated setup options.

Additionally, you can trigger on the various parts o the bus protocols., which facilitates troubleshooting of glitches or errors in messaging.

A critical measurement of any oscilloscope of course. There are two models, one with 70 MHz and the other with 100 MHz bandwidth. Given that the higher bandwidth model costs the same, I’m not sure it makes sense to even consider the lower bandwidth model.

There are plenty of people on the EEVblog forums and on Youtube who have tested the out of the box 100 MHz bandwidth and, in short,

It has a decent 20 MHz function generator capable of generating square, sine, triangle and even noise waveforms. It swings between +/- 12 V, but with an output impedance of 50 ohms, it drops to +/- 6 V at that higher ohm load.

Only the sine waveform can go to the full 20 MHz, but notably, you can apply various modulations to the waveforms such as FM, AM and FSK with several modulation depths.

The ability to freeze the waveform at the right moment is critical for analysis. There are seven triggering options available in the Keysight DSOX1102G.

A requirement on all modern oscilloscopes, the Keysight’s Fast Fourier Transform is accessed by its own button. You can access FFT on either channel and on an intermediate math function as well, a clear differentiator from the Rigol oscope.

Side note, you can hide channels. You can perform math functions without the channels being turned on, very handy if you just want to see the spectra of a signal on a single, uncluttered screen.

It’s fast. When compared to the Rigol, its prone to fewer failures and better for occurrence analysis. Detailed testing examples such as this one abound.

This is a great entry level oscilloscope that has many pared down features of Keysight’s higher end o-scopes. To be fair, one would have to weigh the additional benefits provided in order to justify paying considerably more for the Keysight than the Rigol 1054Z, but it may be worth it for some users.

This is a great entry level oscilloscope that has many pared down features of Keysight’s higher end oscopes. To be fair, one would have to weigh the additional benefits provided in order to justify paying considerably more for the Keysight than the Rigol 1054Z, but it may be worth it for some users.

Get the Keysight Now

How Do Oscilloscopes Work

It is an instrument that serves to observe, analyze and record, in the form of graphs, electrical signals, which change over time.

Through his/her screen and other devices connected to it, the expert visualizes the electrical signals as coordinates, in which the horizontal axis (X) records the times and the vertical axis (Y) the voltages. The image produced is called an oscillogram.

This device is frequently used in signal electronics, next to a spectrum analyzer, which allows you to observe the frequency and size of an electromagnetic wave.

Other devices that complement it are the multimeter, the power supply and the function generator or arbitrary.

What are Oscilloscopes used for?

In the professional and domestic fields, an oscilloscope is useful for directly checking the period and voltage of a signal and, indirectly, the frequency of a signal.

It is also a very versatile and necessary device for electronics technicians, as well as doctors. Together with an appropriate transducer, which converts physical quantities into electrical signals, the doctor can measure blood pressure and heart rate.

But with the transducer it also provides us with the sound power and the magnitude of vibrations in a car, among many other measurements.

How to use an oscilloscope

Basically, it is about connecting the electrical circuit that you want to examine to the input terminals of the device, then you turn it on and adjust a scale on the device according to the input signal.

If we take into account that the scale is the amount of time (horizontal line of the screen) that the electrical signal takes to complete the cycle, at least one millisecond of information will be required. And it is that a signal of 1,000 Hz (1 kHz) is repeated 1,000 times per second.

Another parameter to choose is the range according to the input signal, understood as the maximum and minimum voltage that the device can display, the range for a signal that transforms between +1 and -1 volts should be at least 1 volt.

A third parameter that must be adjusted is the threshold. Since the oscilloscopes require a signal greater than the value of their threshold to start data capture, for a 1 volt signal, the threshold can be set in the 1 to 1/2 volt channel.

In this step you will see on the screen a simple voltage signal. Similar to the displacement of a sine wave, the point in the device goes down and up. On the one hand, the minimum and maximum heights of the wave (signal) indicate the voltage range and, on the other, the amount of time required for the signal to be repeated constitutes the frequency.

In short, oscilloscopes are useful for detecting faults in electrical circuits and identifying whether it is alternating current (AC) or direct current (DC). They play an essential role in the detection of possible unevenness of the signal of a circuit.

Get the Keysight Now

Best Bidirectional Scan Tool in 2022 [Reviewed by an Automotive Technician] 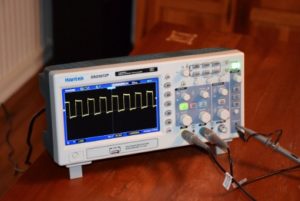